It was in the autumn that I began to see the beauty in the shrub steppe desert that is the Hanford Site. We came to Kennewick, Washington from the midwest in January of 1986. I was pleasantly surprised by the mild winter – mild compared to the below zero weather in Iowa! That first summer we didn’t venture much out of the Tri Cities so we didn’t get much acquainted with the desert that surrounds the cities and towns of southeast Washington. My first impression was that there were only different shades of brown. The first autumn we spent in the Tri-Cities was sort of a shock. I was used to and looked forward to the extraordinary fall leaf colors that typically begin in late September and extend into October in the midwest. There were some trees in the populated areas of the Tri Cities and along the Columbia and Yakima rivers that did change colors a bit but I was mightily disappointed!

In 1988 I began my career on the Hanford Site…the first assignment was in the “200 Area”, just about smack in the middle of the site. Not much to see from a vanpool at 6 a.m. in the morning! I was located in one office complex or another – mostly in the central part of the site for the next decade or so.

Following that I was transferred to the 100K area – that’s when my route to work took me “the back way” along the Columbia River past all the reactors, the Hanford townsite and a lot of untouched desert area. That first autumn working in the K Area was the genesis of my love affair with the land, plants and animals that exist on the Hanford Site. My initial concern was for the workers, present and past. I had 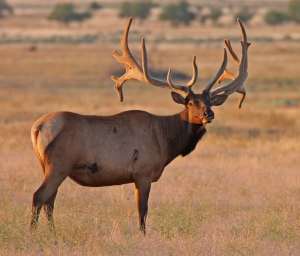 become engaged in participating on the Hanford Advisory Board in 1995 but really didn’t feel the depth and breadth of the gifts of the Hanford lands until my K area days.

I don’t know the names of all the native plants but many of them showed me their finest colors while driving to and from the K area that first autumn. One morning in particular stands out in my mind. While driving past the old Hanford townsite I noticed a herd of elk milling about in the distance near the river so I took the long way to work to more closely view them. I was overcome with a sense of awe when I observed two large male elk fighting each other. They were magnificent!! Yes, I was late for work but I carefully pulled off the road to watch that great spectacle knowing that I might never see something like it again and being privy to that wonderful event of nature was totally worth it. That one event made me look at Hanford in a different way and added to my Hanford journey of constant discovery.

Remediating Hanford is a multi-faceted diamond with positive and negative consequences for every action or inaction. It will never be easy but it will always be worth it. I’m constantly trying to see the “big picture” – environmentally and economically now and in the future as cleanup decisions are made and then implemented.