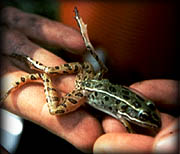 One of the main reasons we are worried about keeping nuclear waste out of our food, air, and water is to protect ourselves and future generations from cancer and other mutagenic diseases linked to radiation exposure.  In the aftermath of the Chernobyl disaster, pregnant women in nearby towns were forced to have abortions, children were born with heartbreaking deformities, and radiation sickness plagued many.

At Fukushima we are starting to see some of the aftermath of the disastrous radiation releases with a very high incidence of thyroid disease in children within 50 miles of the plant.   Scientists have also identified mutations in 50% of the butterflies collected from the area around Fukushima.

The biggest problem is the uncertainty, what we don’t see, what we won’t see until it is too late.  Gene mutations can take generations to manifest, so we may never see the abnormalities born out of low-level exposure to radiation.  It is challenging to fight an invisible, tasteless, scentless enemy.